After a prolonged drought, a deluge soaked southern Andalucía on 2-4 December 2016, in Malaga leading a bus to take on the appearance a sinking boat! For farmers and wildlife, however, this rain has been welcome.

I arrived on 8 December and in the evening paid my first visit to Laguna Fuente de Piedra. I was delighted to see water in the lagoon after a very long dry period that had left the bed of the lagoon baked and cracked on my last visit. Birds were clearly delighted as well as the main lagoon housed several thousands of Lesser Black-backed Gulls and Greater Flamingos; both species had been largely absent during the drought. Numbers of Flamingos had increased even further by 10th December, raising the question of how these birds learned so quickly that water had returned! Other birds, especially ducks, have been much slower to return, with normally common Shovelers few and far between and Pochard still absent. Most other lagoons in the area have some water but are birdless while Laguna Dulce, near Campillos, remains stubbornly dry. Further to the north, between La Roda and Alameda, are two further lagoons. The larger one, de la Ratosa, has some water and few Mallards, while a smaller  lagoon, La Castañuela, closer

to the road, remained dry and has suffered the indignity of being ploughed ready for the sowing of some crop!

Warm winter sunshine for 3-5 hours each day certainly raised my spirits. It has also led to the development of a green fuzz over the landscape, signalling the germination of the cereal crops due to be harvested in 2017. My impression is that even more land is under cultivation this year than previously – good for farmers but worrying for wildlife. 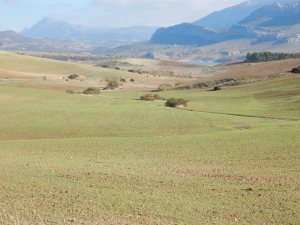 By the time I left Antequera on 16 December, however, some of the smaller shallow pools had dried out again after the cessation of rain, and even the water in the main lagoon was retreating to depressions in the underlying substrate. Nevertheless, many Flamingos were parading and head-shaking in tightly knit groups, presumably in the hope for more rainfall to carry them through to nest renovation and production of the next generation.

This site uses Akismet to reduce spam. Learn how your comment data is processed.